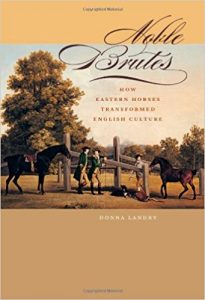 In light of a paper I am working on for WOCMES this year I finally read Noble Brutes. It was long overdue as Donna Landry is an authority in our rather small group of equine historians. She has published on horses as cultural agents throughout history, women writing, travel writing, imperialism and Orientalism. Combining all these elements resulted in the interdisciplinary work Noble brutes, in which she also touches upon Ottoman history, art history and military history.

The book starts with the introduction of “His lordship’s Arabian”, a phrase that characterizes a large part of equestrian discourse in 18th century England (and Ireland).  Landry explains how the Eastern/Oriental horse rose to tremendous popularity following the first wave of imports between 1650 and 1750, and shows that it did not matter at that point where the horse actually came from or what breed it may have been, there was a general tendency to call them Arabians.  She shows how various identities developed in the British Isles, such as English, Irish, Scots, Welsh etc., and argues that a similar movement happened in the horse culture at the same time. Eastern horses represented a legendary equine ideal that had already been formulated in the 16th century, however had perhaps more to do with the way of riding them than the horses themselves.

A  brief sketch is made of “Horsemanship in the British Isles before the Eastern invasion” when horses were still seen as property yet embodied a powerful symbolic. Owning a good horse and riding it well  showed that one possessed all the necessary qualities for social authority and political rule.  The idea of the horse as a ideal version of the human self was on the rise and Eastern imports would “revolutionize” this concept, as argued by Landry.  She starts by showing that the equestrian culture of England has always been based on immigrants.  The phenomena of racing was brought to the Isles by the Romans and during the 16th century, Italian and Spanish equestrian masters of ‘haute d’école, set the trend of riding in the arena.  It is generally thought that European horsemanship went through a “renaissance” following the rediscovery of Xenophon’s work, however Landry points out that we might look a bit further east for support of this rebirth of equestrian values.  She finds a foundation for her argument that the East was the place to look for the origin of the equestrian renaissance, in the existence of a vast discourse on horsemanship from the Islamic world, called furusiyya.  Although furusiyya has not received the scholarly attention it deserves and Orientalism has long been (and still is) so common that Eastern influences on European culture seem absent, the equestrian culture of the east has not gone unnoticed. At first through Italian and Spanish horse masters, English equestrian authorities discovered a more friendly way of approaching the horse, and found confirmation in their observation of the Ottoman’s seemingly very successful handling of ‘noble brutes’.

Landry eases the reader into the idea that there was more to the English admiration of Eastern equitation by explaining of what she calls “The making of the English hunting seat” and the “Stealing of a Turk”.  The idea of “riding like a Turk” is very appealing but Landry does not provide much evidence that the development was so directly based on Ottoman example. However, competitive as the English were in the wake of Imperialism, the shortening of the stirrup and posting the trot became viewed as a final departure from European example and the birth of a superior English way of riding.  Hand in hand with colonizing various parts of the east, many products from that exotic part of the world were naturalized and now viewed as rightfully English. The equestrian culture was no exception to this rule.

But Landry takes it a step further, arguing that through what Gerald McLean called “imperial envy” and the ideology shaping Edward Said’s Orientalism, the imported horses and their naturalized descendents became valued as the epitome identity of British imperialism; Eastern exotic and English appropriated asset of ultimate Englishness.  She uses the story of the Bloody Shouldered Arabian to guide the reader to the various roles this horse has played and perhaps still plays in English equestrian culture. Topics like the trouble of importing horses, marvel over their exotic features, their status as living art and especially the birth of the new genre of “equine portraits” that elevated George Stubbs, John Wootton and others to world famous painters, are discussed extensively. More and more the blood-horse featured in art and literature, while the equestrian society became obsessed with hot blood. Imperial envy was so strong that even horses born on English soil were often called Arabian or Barb, solely as proof of their hot pedigree and not as a reflection of modern ideas of breed identity. The idea that the Eastern horse was superior to any other breed prevailed during the 18th and lasted well into the 19th century.

But what happened when the English Thoroughbred, viewed as the mirror image of the perfect English self was a well established breed of its own towards the second half of the 19th century? I was happily surprised that Landry does touch upon that question a bit. As she opened the book with “His lordship’s Arabian” she closes it with “Her Ladyship’s Arabian”. The Eastern horse had now fallen behind its product, the ever faster and taller Thoroughbred and Landry shows that men now preferred their own ‘hunters’ to the imported stock, a shift that left the once so sought after Oriental horses in the hands of women. The “graceful and short-coupled” horses were perfect for carrying a side saddle and their willingness to cooperate with their rider gave women something of their own  as men didn’t show much interest anymore. A second wave of imports did happen at the end of the 19th century as European travelers went to the Orient in search of fresh Eastern blood to replenish the Thoroughbred stock.  As women were not yet ready to let go of their beautiful and exotic mounts, a new preservation theory was born and the idea to breed purebred Oriental horses ‘back home’ was on the rise, with the efforts of the Blunts mentioned as an example of these expeditions. Landry concludes that with this newly found purpose for the imported stock, namely to not only use it as a source for the English thoroughbred but to breed them as a breed of their own, the Turkish roots were buried in favor of the Arabian. She supports this argument with examples of anti-Turkish prejudice prevailing in Britain at the time, but I personally believe that this issue requires a closer look, not only in terms of the historical or political context but also into the motives of the individual promoters of the ‘newly’ created breed that we now know as Arabian horse.